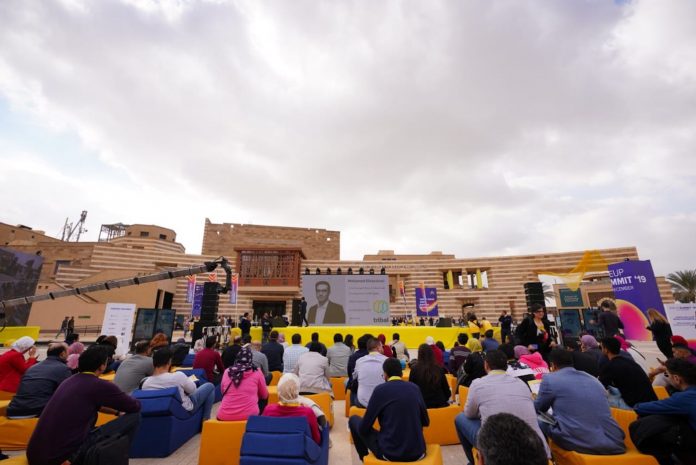 RiseUp Summit 2019, MENA’s leading entrepreneurship event, kicked off its second day at the American University in Cairo (AUC) New Cairo Campus, with a focus on the tech entrepreneurship scene in MENA and the importance of corporate innovation and an internal entrepreneurial mindset. The day hosted speakers from media service provider Spotify, Dubai Airport Free Zone Authority (DAFZA) and Intel. Founder of Emotional Particle Mona Hamdy, Cofounder and CEO of Eventtus Mai Medhat, and Cofounder of Womena Elissa Freiha were among the most prominent women providing their take on the entrepreneurship and tech sectors.

According to a report by the Atlantic Council, there are around 90 million internet users in the Middle East, which is 40.2% of the total population – and the number is steadily growing. While some are worried that technology will take over certain jobs in the future, the advancement of technology gives birth to a multitude of new jobs – which is why having savvy developers is essential. In the entrepreneurship world, technology has become an enabler and having a solid developer onboard is essential to any startup’s growth.

“Developers are among the architects of the future. They build the tools and services that improve our lives and therefore it becomes crucial to underline the importance of developers in today’s global economy,”

“With our initiatives such as ‘Developer Circles from Facebook’, a program designed to create locally organized communities for developers, we’re empowering tech innovators everywhere, supporting them at every stage of their journey towards realizing their goals – whether they’re early on in their developer journey or they’re building a startup.”

Talking about the importance of corporate innovation, Global Innovation Director at Nestlé Gerardo Mazzeo announced that Nestlé is launching a new project in Egypt, looking for a tech partner that can develop a tool to complement its existing automated sales platform which will provide optimized routes for its sales representatives that can take into account the current traffic situation and predicted traffic for rush hours, school times and so on. Interested startups can apply at henri.nestle.com/live-projects.

“Many startups are leading trends and disrupting the food and beverages industry. Major food companies are now increasingly looking to innovate in different ways by collaborating with and investing in small and medium-sized enterprises (SMEs) and startups,”

“Egypt is the fastest growing ecosystem in MENA, with incubators on the rise, the government investing in resources, and bootcamps and events making connecting easier.”

“When you look at the MENA region’s ecosystem, a lot of things need to be tailored to the local context, which is very different than what happens abroad. One of the key players that are still missing from the ecosystem and whose entry into it can be crucial is family businesses. The second and third generations of young people who are the owners of these family businesses have seen the startup ecosystems abroad and are more aware that if they do not find a way to disrupt themselves, they themselves will get disrupted.”

During the Summit, MINT by EG Bank announced its Startup Account, tailored to suit young companies’ banking needs. Its benefits include no fees on the account, a competitive interest rate, and the convenient transfer of payroll online.

Additionally, Egyptian startup “Your Parts”, an online marketplace for purchasing car parts, announced a few of its newest features, such as pickup points for ordered spare parts, the listing of truck parts, and a partnership with Mobil.

In other news, video content agency Excuse My Content launched its all-new school for creative learning, from filmmaking to advertising, under the name SYNC. SYNC aims to provide talks, workshops and courses given by professionals in the field.

Today, RiseUp Summit hosted the first day of the African App Launchpad Cup in partnership with the Information Technology Industry Development Agency (ITIDA), for which winners will be announced tomorrow. The two-day event saw 15 Egyptian and 13 African startups competing to present the best gaming or app development project for a chance to win upto $60,000.

Moreover and for the first time this year, RiseUp Summit 2019 is featuring an in-summit hackathon powered by Dubai Commercity in which 160 developers will gather at the venue to share their inventive ideas for e-commerce digital inclusion and compete for prizes totaling $15,000. The Dubai Commercity Hackathon will focus on promoting e-commerce accessibility in underpenetrated areas, with developers working on addressing digital awareness and solving delivery and internet access challenges.