Industrial robots have changed the way manufacturing is conducted. They have injected a new way of working with efficiency and accuracy increased tenfold across the board. Although it has led to many people losing their jobs, there is an added advantage to the manufacturer as this helps them save a lot of money that would have gone to wages.

However, as much as the machines are better than human beings, they still need to be maintained by people regularly for them to perform as they were designed to. The following are some of the ways through which you can do maintenance on your industrial robots.

A robot controller is the most important part of the industrial robot as it contains the set of instructions that dictate how the robot operates. This controller is a computer chip that works independently, and it gets regular updates that increase efficiency. However, being a computer-based machine, it is prone to hacking or being infiltrated by computer viruses, which can destroy everything. Therefore, it is advisable to always backup the program to a separate entity or a server so that everything can be restarted in the event of an attack or malfunction. Inventions like machine tending robots and other variations of robotic arms make use of movements to get things done. And as is expected of movable parts, friction will always be an issue that gets worse with time. Without regular checkups, these movable parts will wear down too quickly, forcing the entire robot to be replaced, another unnecessary added cost. However, if they are monitored closely, cleaned, and lubricated, they can stay operational for much longer until the time where a replacement is needed, and that could be many years down the line.

Industrial robots can run for days doing repeatable tasks over and over all day and night without breaking the rhythm, this is a good thing, but if left unchecked, things can go wrong very quickly due to ear and tear. Unlike humans, robots have no way of telling when they are overdoing something, a part may be breaking down, and they will keep going as long the instructions keep getting fed into them.

To get the best out of your machines, consider breaks once in a while where the machines are shut down for at least a day for cleaning and other minor repairs to be done. Letting them operate for days on end without stopping may inflict irreparable damage on them, and that would be costly in the end. Industrial robots are mostly made using heavy metals like steel, aluminum, iron, among many others. They are durable and strong enough to deal with all the back-breaking work involved in manufacturing. However, metals are not invincible. They are prone to wear and tear due to friction, and most importantly, they can be affected by rust.

A little moisture in the air is all it takes for rust to set in, and unless proper lubrication and coating are done, the movable parts of the robots will slowly start to degrade, and with time they will break down, forcing you to buy new now since rust is irreversible.

Set aside a day for inspection where you grease, lubricate, and coat all movable parts well to reduce the chances of rust setting in destroying your expensive machines. Most of the robots come with their own special lubricants that you can get from the manufacturer on the cheap if you are a regular buyer. 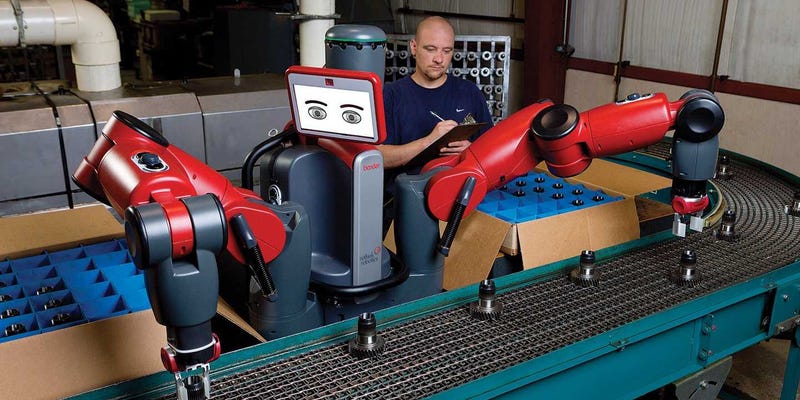 On top of the regular check-ups by the staff within the plant, there’s also the need to get a qualified robot expert, probably from the company that manufactured them, to give them a more detailed inspection that other people may have missed. This doesn’t have to be a daily thing, but it should be scheduled after every four months at least owing to how much work machines do within a short period.

This kind of inspection helps iron out the bugs in the program, the faults in the wiring system, and other parts of the robot that may show some signs of damage. Many robot manufacturing companies usually provide these services free of charge in the first 12 months of purchasing their robots as part of the warranty cover, but once that time elapses, you may have to hire the experts at your own expense. Considering the benefits of having industrial robots that perform at optimum levels, that’s a small price to pay.

For the inspection to be successful, between a whole day and week may have to be set aside, meaning that production will have to come to a halt. There’s the option of doing the inspection in stages so that one half of production continues as the other half is being inspected.

Industrial robots may be superior in almost all aspects, but they cannot self-diagnose, and neither can they repair themselves. To get the best out of them, you must ensure they are well taken care of. Pushing them to their limit may look like a wise idea at first, but once the repair costs start trickling in, you’ll quickly notice that they are eating into your profits.

Three Benefits of a Small Lathe for Industrial Businesses

Facts That You Should Know About Maintaining Your Car

How Much Does a Head Gasket Repair Cost?

How To Choose The Right Industrial Doors For The Automotive Sector

Top 5 Questions to Ask Your Mechanic About Routine Maintenance

How to Increase Productivity in a Manufacturing Setup