Team shooting and military simulation sports are slowly gaining popularity over recent years. The thrill and adrenaline these adventures provide us with are things we just can’t get anywhere else.

However, it’s not a secret that getting hit by ammunition, especially on your bare skin, is not exactly a pleasant experience. BachBio recommends gear that’ll protect your entire body on the field at all times.

On the other hand, if you’re still trying to decide whether to join an airsoft or paintball game, maybe learning which hurts more will help you out.

First, let’s talk about the main differences between a paintball and an airsoft gun that might affect the level of pain you might experience when you’re hit. While both of these guns shoot at around 300 FPS, the ammunition and power they deliver greatly vary.

Airsoft guns shoot plastic BBs using a battery-, gas-, or spring-powered mechanism. With the size of the BBs, airsoft guns usually deliver energy of around one joule, sometimes maxing out at two joules.

On the other hand, the weight of a paint capsule combined with the shooting power of a paintball gun allows it to deliver two to ten joules of energy, sometimes maxing at 12 joules. Which One Hurts More?

Judging by the data we’ve gathered and discussed above, paintball guns would obviously hurt you more than airsoft guns.

For starters, paintballs or paint capsules have a wider diameter than an airsoft’s BB. That means the former can cover a bigger surface area on your skin or body. 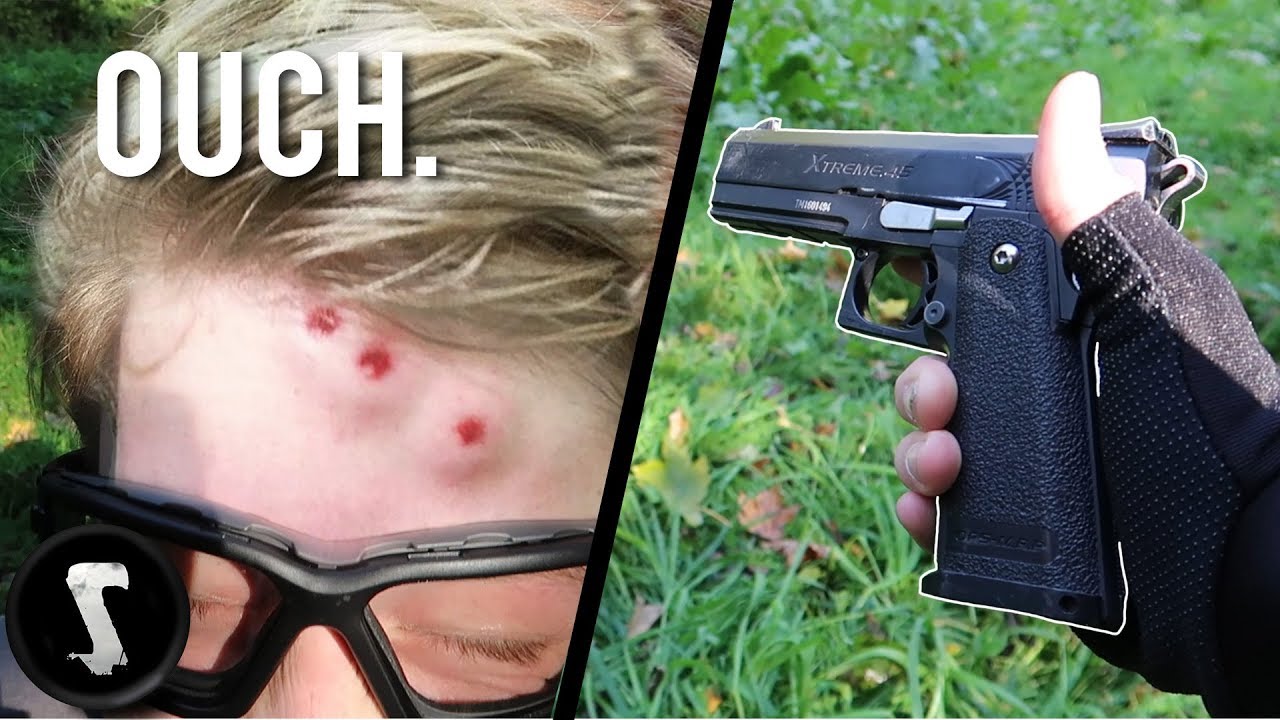 Additionally, the weight of the ammunition and energy released from a paintball gun is almost ten times more than the energy from an airsoft gun. That said, you probably won’t get hurt too much when hit with an airsoft BB while wearing full gear.

On the other hand, a paintball or capsule might still leave a little mark despite wearing a layer of protection.

What Affects the Level of Pain You May Experience?

When you’re on the field, it’s not set in stone that the pain you’ll experience from an airsoft or paintball’s ammunition will immensely hurt. A few factors may affect the outcome, and we’re here to discuss some of them with you.

Whether it’s a BB or a paint capsule, ammunition will inevitably lose its velocity after being shot from a gun. If an airsoft or paintball gun is fired far away from you, the chances of getting hurt from it are significantly low.

To give you a general idea, a 150-foot distance will probably not affect you at all; in fact, you may not even realize you’re hit. The closest someone could hit you where you would feel it but not leave a bruise is around 50 feet.

Have you ever seen a sniper in movies adjusting their rifle after measuring the speed of the wind? If wind can affect a bullet fired from an extremely powerful gun, imagine what it can do to airsoft or paintball ammunition.

BBs traveling against the wind will significantly lose their speed. It might have a lesser effect on paint capsules considering their weight. Nonetheless, either ammunition would still be less painful if you get hit if it’s shot against the wind.

However, BBs or paint capsules shot with the wind will probably be more painful because the wind will help it travel faster. On the downside, the ammunition might change direction.

Protective gear is perhaps the most important factor that reduces the pain you might experience from airsoft or paintball ammunition. Both these sports have layers of protection like a thick jersey, a padded vest, a pair of gloves, and headgear or goggles. In most cases, you will not be allowed to enter the field without wearing protective equipment.

The protective layers of these gears absorb the impact you would otherwise receive from the ammunition. Therefore, you are less likely to experience pain, and you get to avoid all sorts of injuries when you wear protective equipment.

Pain Is Part of the Game

Airsoft and paintball are two of the best extreme sports you could take on if you want to test or hone your shooting and military skills. However, you must ensure that you don’t cut your experience short because of the pain you may experience from the ammunition.

Wearing protective gear is important. On the other hand, learning about the various factors that may affect the ammunition’s behavior when fired from a gun will also help you understand these sports better. Weekend Activities That Can Help You Bond with Your Kids Tips To Buying Garden Supplies To Make Your Garden Decorative 12 Simple Ways to Brighten Your Day