The study of bonds is an important aspect in the field of chemistry. A chemical bond is a long-term attraction between ions, molecules, or atoms that help form chemical compounds.  Atoms usually have less than eight electrons in their valence shell which makes them unstable. Atoms become stable when they react with each other and have more than 8 electrons in them. These are achieved by metallic bonds, ionic bonds or covalent bonds.

Covalent bonds can make multiple bonds between two atoms. Atoms that are similar or have significantly low electronegativity differences can react by sharing electrons to form Covalent Bond. Multiple bonds can be formed in two ways – Sigma Bond and Pi bond.

Sigma bond and PI Bond are two types of covalent bonds in a molecule. For example, consider the C2H4 molecule.  It has 5 sigma bonds and 1 Pi bond. Both of them are formed as a consequence of overlapping orbitals of different atoms.

The overlapping happens due to incomplete orbitals of the atoms. The overlapping can either be head-on or may happen side-to-side. This results in the formation of Sigma bond and Pi Bond. 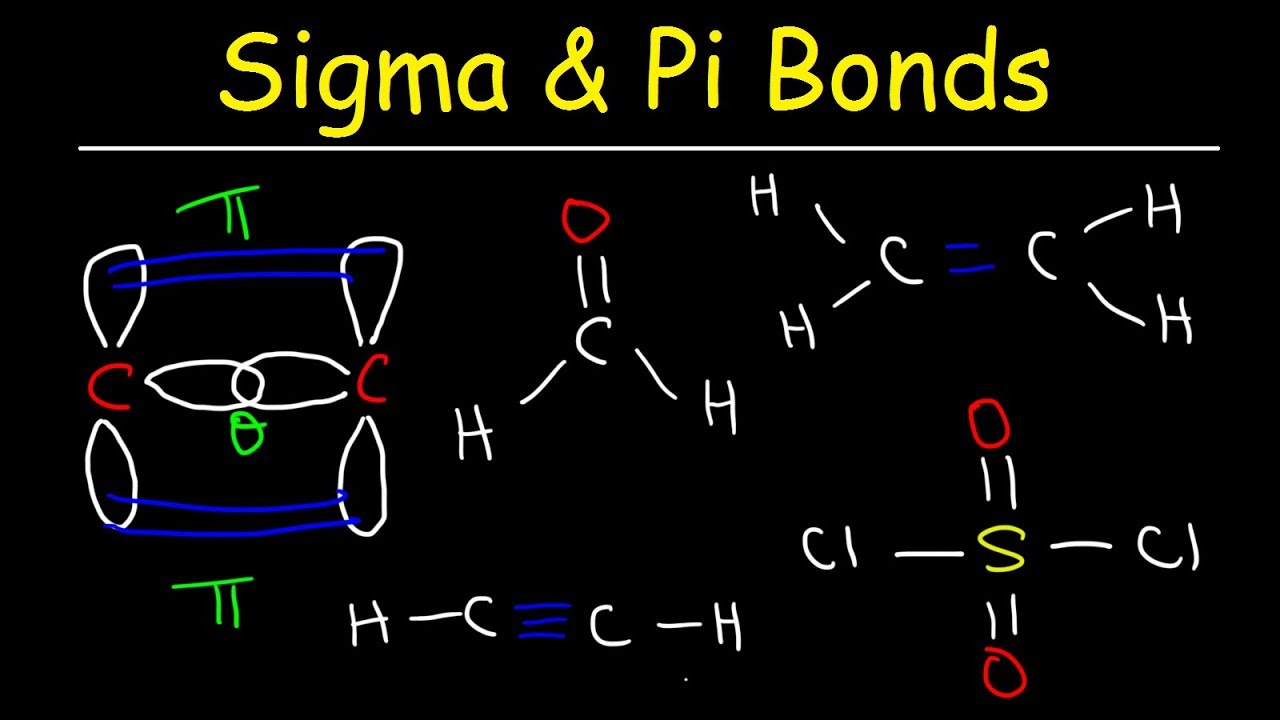 Sigma bond is represented by the Greek symbol (σ). It is the strongest bond where atoms are formed by the overlap s or p orbitals in an end-to-end manner, and the electron density gets concentrated between the nuclei of the bonding atoms.

Sigma bond is symmetrical with regards to rotation around the bond axis. s+s, pz+pz, s+pz and dz2+dz2 are common forms of sigma bond (z denotes the axis of the bond). These bonds do not show hyper-conjugation or any bond resonance.

The below picture shows Sigma bonds and depicts different types of overlap formed by head-on overlapping of atomic orbitals.

Pi Bond is represented by the Greek symbol (π), which refers to P orbitals. The overlap of p orbitals forms this bond in a side-by-side manner, and the electron density gets concentrated above and below the nuclei of the bonding atoms.

Two lobes of an orbital overlap in Pi Bond, with two lobes of another orbital of another atom. This helps in lateral overlap.  Pi bonds can form double or triple bonds but never a single bond.  Pi Bonds tend to demonstrate properties of the conjugated structure.

In the below picture, an illustration of how two p-orbitals are forming a Pi bond with a side-by-side overlap has been shown.

It is important to distinguish Sigma vs Pi bond and know the comparative properties of both of these bonds. While the variances between the sigma bond and Pi bond are complimentary, the concrete differences have mentioned in the table below for a better understanding.

To summarize, Sigma Bonds and Pi Bonds occur from the same origin, and both are covalent chemical bonds. Sigma bond is between atoms inside a molecule formed by S orbitals that overlap on the axis joining the nuclei. On the other hand, Pi Bonds are molecular bonds formed by overlapping P orbitals from diverse atoms.